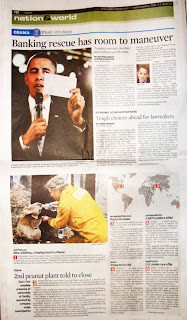 There was a time when the sun never set on the British Empire.

And there was a time when you could almost say that about The Baltimore Sun, for all the foreign correspondents it had spread around the planet. London, Paris, Bonn, Rio, New Delhi, Moscow. Over the years, the countries changed with the times. There was Tokyo, then Beijing. Johannesburg. Mexico City. And its Washington Bureau was not too shabby, with a dozen folks reporting the goings-on of government just for Sun readers.

Nothing new about the cutbacks, really – what was left of the foreign offices closed last year. The Sun's Washington Bureau has pretty much become overview reports and analysis by the very capable Paul West.

The latest move, inevitable given the trend, is the source of The Sun’s “nation & world” page: Not Baltimore.

About the time I took leave of The Sun in 2007 with a voluntary buyout to end a 40-year career, unsettling plans were under way to replace the newsroom computers used for writing, editing and page design with equipment like that in the parent Tribune Company’s Chicago Tribune flagship newspaper. It would simplify production of news outside Baltimore – I foresaw a day when the national desk would be fully located in Chicago, with pages designed around advertising holes that would be common for every paper in Tribune chain.

I wasn’t the only staffer leaving the paper then, or in the subsequent series of other buyouts and layoffs that saw the reporting and editing staff shrink substantially.

So I really wasn’t surprised when I noticed the change on an inside page in Sunday’s news section: It was readily apparent from the jarringly different headline style and typefaces that the page did not originate in the Baltimore Sun newsroom or, necessarily, in a unionized newsroom.

Something you need to know about Baltimore natives, of which there are few these days in the newsroom: They’re xenophobic. Many of them, anyway. I haven’t sufferered from that malady beyond my intense dislike of the New York Yankees and Pittsburgh Steelers, and what became of the Baltimore Colts, of course.

Now I have nothing against the cities of New York, Pittsburgh, Indianapolis – and I kind of like Chicago. But it just sticks in my craw when folks from there come here, take over and muck things up so badly.

This is not to say that Jim Puzzanghera, Maura Reynolds and James Oliphant are bad journalists. They’re fine, I’m sure. They’re the folks whose bylines appeared in Wednesday’s “nation & world” page atop an identifying line stating “Washington Bureau.”

Trouble is, Toto, it’s not the Baltimore Sun Washington Bureau anymore. They’re Tribune folks covering the news for papers in Baltimore and probably every other city in the financially bankrupt chain -- although not in same shrunken format for the company's "major" papers in Chicago and Los Angeles, I'm told.

It’s the price readers across the nation are paying for consolidation of the newspaper industry: Unique and varied reporting is diminished. The Fourth Estate is weakened.

I remember when The Sun redesigned the back page of the Maryland section, back when it had a Maryland section, to compete with the colorful weather page produced by USA Today. (Now the weather report in The Sun is minimized on an inside page, pretty much the way it was decades ago.)

The news stories, alas, are following suit – smaller, minimized inside. Except there aren’t nearly as many stories as in USA Today. And if you hunger for national and international news, The Sun is in eclipse.

A newsroom friend told me the change took place last Thursday, and others likely are coming – more national and international news created, edited, designed in Chicago for readers in Baltimore, and a likelihood there will be ever-fewer copy editors and page designers needed locally to produce The Sun. There might even be a redesign so the ugly typefaces and headline fonts used in Chicago are duplicated in Baltimore.

As I said, I’m not surprised. I saw it coming. Maybe the readers didn’t even notice, it’s such “inside baseball.”

Once upon a time, The Baltimore Sun was among the handful of U.S. newspapers on the desk of the President.

Not much point in that these days.

Jay Leno noted Wednesday night the proposal in Baltimore for a restaurant serving up sushi on topless women.

“Is that a good combination?” Leno asked. “Naked women and seafood in a city famous for crabs?”

You find beauty in ordinary things. Do not lose this ability.

I recently came across your blog and have been reading along. I thought I would leave my first comment. I don't know what to say except that I have enjoyed reading. Nice blog. I will keep visiting this blog very often.