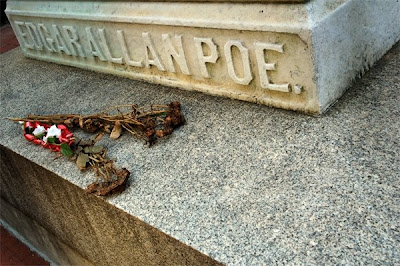 A shame that he’s long gone:
He might have liked the party

Today is my old friend Eddie’s birthday. I once was obsessed with Eddie, back in the days when I wrote sappy poetry. (Not that I’ve written many poems that weren’t sappy, although I never wrote one for him!)

Eddie’s brief life was full of woe – between the women and the booze, rejection by relatives, deceit from supposed friends, he was troubled. Haunted even. I suspect there was never a woman he loved, unrequited or otherwise, whom he didn’t imagine locked away in a sepulchre. Preferably one at the seaside.

And then there was the bird. The poor man is probably better remembered for his bird than his larger body of published work.

You’ve doubtless guessed by now, given the photo above , that my old “friend” is Edgar Allan Poe, who would have been 200 years old today – had he lived. (I stole that last turn of phrase from my pal Rafael Alvarez, who once used it for a Baltimore Sun story on George Washington’s birthday... writing something to the effect of “...Washington, who would have been 258 yesterday had he lived.”)

Poe died and was twice buried in Baltimore. (There’s a fate: Being buried twice in Baltimore, and sharing his later plot with both his cousin/bride and aunt/mother-in-law.)

Different plots, same cemetery, at the southeast corner of Fayette and Greene streets. What once was the Westminster Presbyterian Church, built over part of the cemetery, was acquired by the University of Maryland School of Law and now is overseen by a trust. It is used for lectures and special events that this weekend included the first of several Poe Bicentennial celebrations planned this year.

There’s several cities laying claim to Poe: Richmond, Va., where he was raised; and Baltimore, Philadelphia and New York, where he variously lived and wrote his enormous legacy of poems and tales which include the roots of detective stories and science fiction.

Poe residences survive in the latter three cities, the oldest of them in Baltimore where he lived for a time with his eventual bride Virginia, who was just 13 when they wed, and his aunt (her mother) Maria Clemm.

Psychiatrists would have had a field day with Poe, who lost his mother as a young child and saw his wife withering away from “consumption” in her early 20s. But his obsession with the likes of death and premature burial, and his elegiac poems to lost loves, are rooted in his suffering. He remains an archetype of the pained artist.

When Poe died in Baltimore in October 1849, a few days after being found incoherent, it only figures that the demise of the 40-year-old writer of the macabre would itself become a mystery. One of many theories was that he was plied with alcohol and “cooped” to vote at various polling places for an election, then cast out into the damp weather. A few years ago, in an annual meeting of forensic experts at which a celebrated death is examined, the assembled doctors suggested he died of rabies.

That’s scary! Maybe I should stop feeding the squirrels on my back porch....

Baltimore doesn’t get a lot of respect, so holding onto the Poe legacy is locally important. When folks in Philadelphia recently suggested moving Poe’s remains there, it created an amusing but meaningless media flap – after all, nobody is about to dig him up. But the publicity hardly hurts whatever tourism Poe generates.

The annual birthday celebration is orchestrated by Jeff Jerome, longtime curator of the Poe House and Museum a few blocks to the west where Eddie resided in the early 1830s – more than a century before public housing was constructed adjoining the now end-of-row building, and eventual community decay made the neighborhood scarier than Poe’s stories. (It is an adventure driving past drug corners to reach the landmark in the 200 block of N. Amity St.)

For the bicentennial program Saturday and Sunday, actors and puppeteers staged Poe’s “Hop Frog” and “The Tell Tale Heart,” and John Astin (Gomez on TV’s “The Addams Family,” now teaching theater at Johns Hopkins University, and noted for his one-man show portraying Poe) delivered a heartfelt tribute with readings of some notable PoeMs including “Annabel Lee” and “The Raven,” and the creepy tale “The Facts in the Case of M. Valdemar.”

In the latter, the narrator relates his experiment in “mesmerizing” an elderly man on the verge of death, and how afterward he lingered in a state of seeming suspended consciousness that astounded attending doctors. Fantastic?

“In London,” Astin noted afterward to chuckles, “they believed it actually happened.”
There was a free raffe for a birthday cake created by "The Ace of Cakes" in the likeness of Poe's landmark tombstone, with a raven atop it, and an unveiling, of sorts, for the Poe commemorative stamp issued by the U.S. Postal Service (after its official unveiling a day earlier in Richmond). 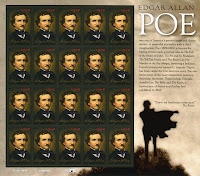 I bought a couple of sheets of stamps to use on the rare occasions that snail-mail is necessary these days.
Bonnie and I attended the sold-out Saturday night presentation, and sometime over the weekend – in the wee hours – there was the expectation that a mystery visitor would make his annual appearance at the grave marker, leaving three roses and a half-empty bottle of cognac. (As a newshound, I always suspected the visit was being arranged by curator Jerome, but whatever – any stunt that keeps Poe before the public, I readily forgive.)
Another two performances are scheduled for Jan. 31 and Feb. 1.
But any time you’re visiting Baltimore, don’t miss Poe’s grave – the cemetery is open weekdays during daylight hours, and there are tours offered in warmer months that include the creepy catacombs of graves beneath the former church. Poe House, operated by the city Commission for Historical & Architectural Preservation, is open Wednesday through Saturday afternoons (the safest hours, one suspects) from April to December.

And for any of you who may never have indulged in Poe, herewith, courtesy of “The Literature Network” online compilation of his works, is Eddie's "Annabel Lee" at his bathos best:

It was many and many a year ago,
In a kingdom by the sea,
That a maiden there lived whom you may know
By the name of Annabel Lee;
And this maiden she lived with no other thought
Than to love and be loved by me.

The angels, not half so happy in heaven,
Went envying her and me -
Yes! that was the reason (as all men know,
In this kingdom by the sea)
That the wind came out of the cloud one night,
Chilling and killing my Annabel Lee.

But our love it was stronger by far than the love
Of those who were older than we -
Of many far wiser than we -
And neither the angels in heaven above,
Nor the demons down under the sea,
Can ever dissever my soul from the soul
Of the beautiful Annabel Lee;

Alas, at the corner of Fayette and Greene, it’s just traffic whizzing past and Baltimore’s cacophony of police car, ambulance and fire engine sirens.
Posted by David Ettlin at 3:30 AM

FYI - A novel entitled "Imp: Being the Lost Notebooks of Rufus Wilmot Griswold in the Matter of the Death of Edgar Allan Poe," relates the last mysterious week of the tortured soul's life. It draws on many of Poe's short stories and portrays the poet himself as "The Imp of the Perverse," and reveals his fate to be much the same as Mr. V. Unfortunately it seems to be unavailable though it won a British literary award from the London Crime Writers Association.

Very good poem...Liked it so much!!